If you like to buy your fish whole to do your own filleting and de-boning or even catch your own fish to clean and prepare on the spot or later at home, then you need a good fillet knife. While a manual knife can do the job for a single fish, if you want to make quick work of more without too much effort, then you should get yourself the best electric fillet knife for the job.

But what is a fillet knife and how does it differ from a carving knife? The latter is meant for slicing cooked meat, cheese and bread into thin and even slices and has a straight, fairly rigid and slightly deeper blade. A fillet knife is narrower, more flexible and with a curved edge and pointed tip to fillet delicate raw fish as well as work around and through bones without tearing the flesh. If you’re really after a carving knife, take a look at our top picks for those.

But what is the best electric fillet knife to buy? When choosing your knife, look for one with sufficient power to handle cutting for a reasonable amount of time without the motor getting hot. If you can get one that works with variable speed, that will give you more control with the filleting. The blade should be long enough for large fish and should be stainless steel for long life.

If you’d like to research a few more fillet knives yourself, here’s a selection of electric ones from Amazon, rated 4 stars or more. Otherwise read on for our electric fillet knife reviews.

If you are looking for a basic freshwater electric fish fillet knife, then you’ve come to the right place. The original Rapala Electric Fillet Knife is the least expensive electric on this list, yet it is also one of the more capable units here. A fillet fork is thrown in with this model. The 110V power cord is of a decent length too.

The 7 1/2 inch stainless steel blade should be large enough for most fish, but ideally, this knife is in its element for species such as panfish, bass and walleye.

All this being said, large catches that cause the knife to run for an extended period of time may cause the motor to overheat, so really, this one could be best termed for occasional use only. If you are only a weekend fisherman, and bring in only a few fish for dinner over the fishing season, you won’t go wrong with this. 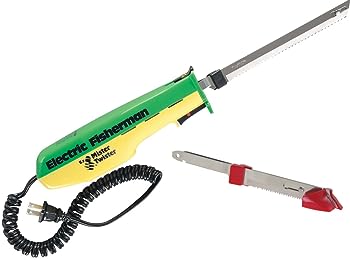 The Mister Twister Fillet Combo EZ-ScaleR is an inexpensive fillet knife that will do the weekend warrior proud. Don’t expect to be doing large saltwater fish because the blade is not the longest and you should give the motor a rest in between, but for those occasional freshwater catches, you’ll be okay with this unit. However, you can buy an optional 9 inch blade and switch the 7 inch one out. You may need a cord extender with this, as the cord is a bit short.

The 7 inch blade works well on panfish and this 120V AC power model has been around on the market for a while, but this combo unit’s claim to fame is the scaler blade that comes with it. The electric scaler works extremely well in taking off the scales, so you can eat the skin without separating it from the meat. This may be the fastest electric scaler on the market, and if that is a priority to you, this is the only electric fish knife to have. 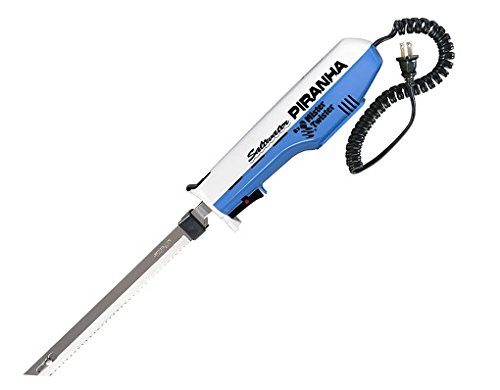 If you are primarily a salt water fisherman, you know that you’ll need a heavier duty knife for cutting through the tougher scales of the fish from the ocean. And that’s what you’ll get with the Mister Twister Salt Water Piranha Knife.

The motor gives you a speedier cut with more torque than their standard electric fillet knife, and the larger 9 inch blade allows you to fillet larger fish without a hassle. You could use this for freshwater fish, as long as the fish are larger, like pike and walleye, but the blade is really not thin enough for panfish or perch.

The extra power and speed also makes this a good carving knife for such things as briskets, whole turkeys and roasts. For your saltwater fillet needs, this will do the job.

Be aware that this knife does not come with a carry bag.

This is the Rapala’s big sister to their original fillet knife, and if we were to choose a best bang for the buck unit here, the Rapala Heavy Duty Electric Fillet Knife wins the trophy.

You’ll get twice the blade speed and three times the power, which makes this electric capable of being a freshwater or salt water fillet knife. This thing will slice through bones without a second thought, and if you ever wanted a deluxe home carving knife, this is it.

The 7 1/2 inch blade may be the only drawback to filleting very large fish, but it will run for as long as you need it to and it won’t over heat. This electric cuts so good, beginners will need to get the hang of it before they will be able to cut the fillets from the bones instead of shredding the entire fish.

It’s in the mid-price range of all of these knives, has one of the best ergonomic grips, and if you need a go-to hard working electric fillet knife, we pick this one as the best electric knife for filleting fish. 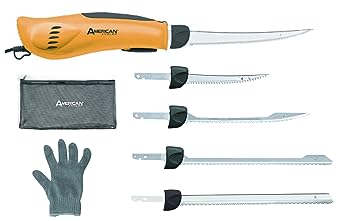 The most versatile and overall best electric fillet knife on this list goes to the American Angler Pro Electric Fillet Knife. This is a deluxe package that also comes with 5 separate blades, a carry bag and even a knife glove that will resist cuts and keep your hand safe. The power cord is 8 ft long.

The American Angler has twice the torque of most electrics, so you’ll be able to use it for both saltwater and freshwater fish fillets. It also has the best ergonomic handle of them all, and if you are filleting a lot of fish and need one that will hold up and won’t overheat, this is a terrific choice. This is because of the vents for air flow and the cooling fan design.

That being said, this electric is far and away the most expensive unit here, but it gives you the most versatility due to the included 5 different blades, than any other knife on this list, and it even comes with a carry bag and best-on-list 2 year warranty.

It comes with a 10 inch long generic saltwater blade, which should be good enough for the largest fish. There is also a 10 inch shark blade and an 8 inch shark blade, which are designed to slice through the tough hide of sharks. You’ll also get a 5.5 inch blade, making it perfect for panfish fillets, and a larger 8 inch blade for larger fish like bass, pike and walleye.

This electric may be overkill for most anglers, but if you are serious about filleting fish and you demand the most filleting options, then with price no object, this would be the perfect fillet knife for you.

Of course, as with all electric fish fillet knives, the hassle has always been with the cord. One false move and you’ll slice right through it. Not a good time when you need to fillet fish for dinner.

Well, the Rapala Lithium Ion Cordless does away with the cord, so you can charge it up and fillet fish anywhere at any time. You’ll get 80 minutes of run time, so that should easily be enough fillets for a family and friends dinner and once the battery has run down, it will take about 2 hours to get it back up to a full charge. For longer run time, you can get extra batteries at an additional cost. A safety lock ensures it won’t start accidentally.

Now, don’t expect to be filleting saltwater fish, although some of the smaller ones like Tilapia would be okay. This rechargeable fillet knife is more suitable to freshwater fishing, and the 7 inch blade length should be capable of filleting some of the larger sized fish.

For convenience and practicality, anywhere you need to fillet fish, the Rapala cordless can’t be beat.