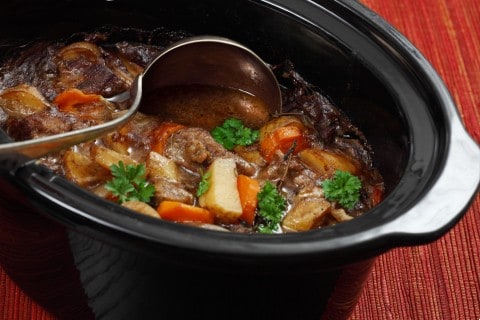 The meals cooked in a slow cooker are extraordinarily delicious. They are simple, healthy, appetizing, and flavorful. That said, recipes without exact instructions and quantities can be difficult to cook and can be easily messed up if they become too watery. The most common mistake that occurs while cooking in a slow cooker is the excess liquid created.

You need to learn how to reduce liquid in a slow cooker to resolve this issue. This can be done by various means, like cooking an appropriate portion size and maintaining a proper temperature. You can start by using less water and if it is in excess then add an appropriate amount of spices and herbs, as the increased water might make your dishes bland and tasteless. Read more if you are having trouble with removing excess liquid from your slow-cooked meals!


Why Does My Slow Cooker Make Everything Watery?

A slow cooker is a popular kitchen appliance. Thanks to a slow cooker, meals are now simple to prepare. However, you need to learn how to use a slow cooker properly and adapt regular recipes for slow cooking.

If your slow cooker is giving you watery meals, it could be because you have added too much water to start with. Since the steam formed does not have a way to escape during the cooking process, it condenses on the inside of the lid and you will get a watery meal.

Water-releasing foods, such as vegetables and meat, eliminate the need for extra water. To avoid unintentionally making your dish watery, do not add the same amount of water that you would while doing normal stovetop cooking. When cooking with a slow cooker, a good rule of thumb is to use half the amount of water you normally would.

The time it takes to reduce the liquid depends on how much water we started with and how big your slow cooker is. If you are having trouble decreasing the water level in your slow cooker, you can transfer the ingredients to a pan and allow the pan to sit on the stovetop over high heat. Stir regularly to prevent the solids from sticking to the pan and burning.

Do I Have to Add Water to a Slow Cooker?

Any slow cooker must have access to water in order to function properly. Since the components are in direct contact with the pot, which is heated by the base coils, they will burn if there isn’t enough water.

In most cases, you will probably have to add water, broth, or a similar liquid to the recipe. A considerable volume of water is necessary as a basic component while making a soup, for example. However, you may want to halve the amount of water called for in regular stovetop recipes because slow cooking doesn’t let much steam escape, so the liquid won’t reduce the way it would in a pan on a stovetop.

How to Thicken Slow Cooker Stew Without Cornflour

If you’re trying to prepare a stew in your slow cooker, you might be tempted to add cornflour to reduce the excess water. While this will do the trick, there are other ways to handle the issue. Learn how to reduce slow cooker liquid in these additional ways:

Use the Right Size of Cooker

Slow cookers come in a number of sizes to suit a wide range of needs. You can choose between 1.5 quarts to 12 quarts. Cookers of 1.5 to 3 quarts are great for a single person or two, but you will need more quarts if you have a family. To ensure that all of the contents cook evenly without becoming too watery, manufacturers recommend filling the slow cooker until it is three-quarters or half full. You will likely end up with undercooked or overdone food if you stack it even higher or use a crock that is too small. It is possible that it will result in an overflow or mushy stew. Here are our top picks of the best slow cookers on the market right now. If you want to be able to prep a meal before you go to work and have it ready for you when you’re back home, then pick a programmable slow cooker that can automatically turn on at a later selected time.

Take the Lid Off the Slow Cooker to Thicken it Cooking with the lid open is the way to go if you want to reduce the amount of liquid in your stew without losing the flavor of your dish. You can remove the lid from your slow cooker and cook on high heat for 1-2 hours. If the steam from the cooking is allowed to escape, your stew will not be too watery.

Defrost Foods Before Adding Them to the Cooker

While a slow cooker can be used to cook raw meat and vegetables, it should never be used to cook food from a frozen state. Frozen foods release water as they thaw, which can make your stew watery. Moreover, a slow cooker can take an extra couple of hours to reach a simmering or cooking temperature. If any meat is frozen, it may deteriorate during this time, resulting in food poisoning. Instead, thaw the meat completely before adding it to your slow cooker.

You can reduce the quantity of fat on the meat before using it for your stew. Choose lean meat cuts, reduce visible fat from meat, and cook your stew with minimal oil. To remove part of the fat, some people also choose to pre-brown or seal meats before adding them to the stew.

Turn the Heat to the Highest Setting As a result, rather than focusing on temperature, most slow cooker users concentrate on time. The food inside your slow cooker will eventually reach a maximum temperature of just below or at the boiling point, regardless of whether you select the Low or High setting. So, if at any point during the process you feel that your stew is becoming too watery, we suggest that you set the cooker at the highest heat and cook with an open lid.

Add a Handful of Uncooked Rice

You can also add some uncooked rice to your stew to make it thicker. Uncooked rice absorbs the liquid and turns into a palatable grain that can be served as a side dish.

Use 2 to 2.5 parts water to 1 part rice ratio for cooking rice on its own. Whether it is white or brown rice, they will not only help your stew become less watery but also add a hearty flavor to your dish. You may not even have to cook a separate carb to go with your main dish.

Add Some Hardy Vegetables or Potatoes in the Middle of Cooking

You can also add some vegetables like potatoes, beans, or carrots while preparing your stew because they soak up water fast. Just make sure to give them about 30 minutes to cook fully before you turn off the cooker.

How to Thicken Slow Cooker Stew With Cornflour, Flour, or Tapioca Wheat flour, tapioca starch, arrowroot, and corn starch are the most often used food thickeners, and one of them can be found in almost every kitchen. You can add a bit more cornflour to thicken the stew if your recipe already calls for it. However, if used incorrectly, some flours might change the taste of your dish.

You can combine one tablespoon corn starch with two tablespoons of water and pour the slurry into your dish for improved consistency. Corn starch does not include gluten, so it keeps your recipe’s natural flavor while quickly absorbing extra liquid. Other good choices for this purpose include tapioca and xanthan gum, both of which have a flavor, whereas arrowroot doesn’t.

When to Add Cornstarch to Slow Cooker

Cornstarch is a thickening ingredient that can be used to thicken any stew. You can add a slurry of cornstarch and water to your slow cooker stew towards the end.

Drizzle this mixture slowly into your slow cooker a few minutes before cooking ends. Stir it into the meal and make sure there are no undissolved bits of starch floating around.

As a result of the cornflour, the liquids in the recipe will thicken. If necessary, repeat this step, but be careful not to over-flour your recipe. It is usually sufficient to do it once or twice. Some people also like to ladle the stew out of the slow cooker, whisk in the cornflour, and pour the mixture back into the cooker.

What can I substitute for cornstarch in beef stew?

You can substitute cornstarch with arrowroot, tapioca, or plain flour. However, you need to keep in mind that although cornstarch will gloss up whatever it is thickening, thickening stew with flour will not. With arrowroot and tapioca flour, you can get the same glossy finish and are a great substitute.

Can I use plain flour instead of cornflour to thicken a stew?

Yes, you can. The simplest technique to thicken stew with flour or cornstarch is to make a flour slurry. When using plain flour, mix equal parts flour and cold water in a cup until smooth, then add into the sauce. Bring the contents to a low simmer for at least 5 minutes to remove the raw flour flavor.

Can you thicken beef stew with gravy granules?

When making a stew or a chili, it is tempting to just add a sprinkling of gravy mix to the pan. It is a terrific way to thicken and flavor a dish, but it will add a lot of calories if you use a lot of it.